×
Go to content
×
If you suffer from anxiety, then you know just how debilitating it feels.

What if I showed you some ways to release this condition forever without pain or drugs?

I intend to do just that!

Let's explore the overall cause of an anxiety or panic attacks.
While I may not know you as an individual, I can tell you that fears are at the core. You see just as a regret is about the past, anxiety is about the future learned from the past. The real fear is about what will happen in the next moment, which stems from an experience or a series of experiences we've had previously. These previous experiences have taught us we have something to fear...what if it happens again...what if something like it happens?

It is important to understand that both the 5% of conscious and 95% of subconscious awareness affect our emotions in the moment, and the subconscious is millions of times more powerful. You see, biologically, we were designed to take past experiences and learn from them to help us with future possibilities and this became a part of the subconscious or conditioned way of surviving. While during caveman days this would have served the purpose of keeping us safe, now the threat of being eaten or killed no longer exist, at least for most people, and so this way of operating gets in the way especially when it is out of control.
Now the human mind, also known as the egoic or ego mind, operates in the past and future exclusively and essentially takes unresolved past traumas and creates fear of reliving it in the future. These fears are triggered whenever we experience anything that has a similar energy signature or feeling, compounded by unfinished healing, resulting in anxiety and panic attacks.
Further, the ego likes to jump back and forth from past to future as a way to distract us from the moment since when you are “here now”, it doesn’t exist in our human awareness. The ego mind relates this to something it fears most, its own death.
Regardless of how it may appear, there is a positive side effect to the ego mind; it brings unhealed issues to conscious awareness for resolution.
One popular way to deal with this is through talk therapy. But not everyone is real keen on the idea of diving into the past where his or her fear begins, not to mention the expense of taking such an adventure. Further, it is understood that while talk therapy can help us indentify some reasons for our anxiety, it doesn't do so well at collapsing them. You may experience a temporary lightening up or release, but did it resolve the core cause(s)? What if you want more than some coping tools? Even if we have a full understanding of the discovered cause(s), how do we release them and the resulting upset?
This is why drugs are so often prescribed and used. The problem with using this approach to deal with the situation is that drugs are only a cover for the problem since treating the symptoms doesn't take care of the cause. Adding in the side effects can often make this "remedy" not worth it. Further, it is conceivable that you may end up using these drugs for your lifetime since the cause was never dealt with.
What I am going to show you and tell you about, bypasses all this time, expense and the side effects.

But first I feel it is important that I share some ways to work through and deal with a panic or anxiety attack as it is happening.

For most people the first sign of anxiety is feeling a fair amount of tension in their muscles, often showing up in the stomach first, but just as easily being a full body experience connected with a profound sense of uneasiness or dread. In response, the breathing becomes rapid, sometimes followed by dizziness, and in extreme cases, fainting. Many feel like they are having a heart attack and may even be rushed to a hospital. As implied, the certainty that death is knocking at the door is extremely high in these situations.

So how do you deal with an anxiety or panic attack as it is occurring?
In working with my clients, I have found that when they are distracted away from the anxious moment, they move through the attack quite quickly. Since it is typical to start breathing rapidly during an attack, I ask them to place the palm of their hand on their diaphragm or belly while focusing all their attention on feeling themselves breathing nice slow deep breaths.
The positive effect of doing this exercise is that three things are accomplished.

For those times when you don't have someone around to remind you, I suggest making a recording of yourself while in a calm state of mind, whether it is an audio or a video doesn't matter. What you are after is the calm reassuring sound of your own voice reminding you to place your hand on your diaphragm while focusing on your breathing. You can even add some soothing background music; just make sure it doesn't cover up your breathing instructions. Perhaps you can add a reminder that "this too shall pass" if you feel that would help you during an attack. Word of caution though, for some, adding this phrase can act as a reminder that something is wrong when you are really trying to get through the moment. 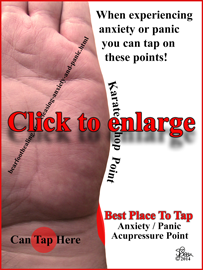 For those who are interested in affirmations, I would suggest the following; tap on the karate chop point, (the edge of the hand between the pinky finger and wrist), while repeating to yourself (preferably out loud for maximum effect), ''I love & approve of myself and I trust the process of life. I am safe!'' or ''I am completely safe and secure in this moment now!'' What this procedure does is bypass the unbelieving mind while anchoring in a new empowering thought. This is best used just as you feel an attack coming on. I know it is possible to collapse the core fear just by using this tapping technique. If you forget the affirmation, just tap anyway. The tapping itself will help collapse the fear behind the anxiety in the moment.
So the steps are:

or  2. Continue tapping while taking a slow deep belly breath through nose

3. Continue tapping while slowly exhaling through nose or mouth

4. Repeat sequence again while allowing the fear to release until it has passed


Tapping on the karate chop point has been shown to be extremely effective since it indirectly stimulates a more precise point specifically for anxiety and panic. This point is right at the wrist joint along the same edge as the karate chop point. In my experience, tapping on this point with one or two fingers when you are experiencing anxiety or panic will stop the symptoms in their tracks.
If you want even more do-it-yourself assistance, use my EFT Tapping Script for collapsing Anxiety and Panic while it is coccurring. 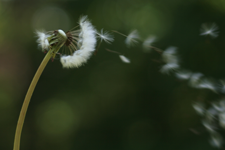 As a long-term solution to having panic or anxiety attacks, you can look into using a few great forms of energy release that collapse the cause at its core. These solutions are also great ways to approach moving through a feeling of anxiety or a panic attack as it is occurring.
The Sedona Method is based on the understanding that our emotions are separate from us, though most people proclaim they are their emotions. (“I Am…Angry, Sad, etc.” rather than “I Am Feeling… “ or more precisely, “A part of me is feeling…”) These emotions are in fact just energy that can be released as easily as dropping an object from your fist by merely turning your hand over (palm side down) and opening your hand.
In this method you ask yourself the following questions while fully feeling the anxiety or fear.

It doesn't really matter if you answered no, no, & never to the questions. The fact that you are asking them is enough to release at least some of the fear. The object is to keep asking these questions until there is no fear left to cause your anxiety or panic. What's great about this method is that even though it may seem too simplistic, it actually works to collapse the fear without even knowing what it was. No time consuming and expensive sessions with a Psychologist or Psychiatrist, or any drugs to take.

Self-Inquiry is conceptually similar to the Sedona Method though it is approached differently. With self-inquiry you contemplate who is the one feeling this right now. You are essentially looking to discover if you are actually experiencing anxiety in this moment since fear is a focus on future possibilities resulting from past experiences.
When self-inquiry is done every time anxiety is perceived, the natural outcome will be peace in the moment. You can use this method during a panic attack, though it is harder to do for some people because the ego mind tends to so readily identify with what we appear to be experiencing.

For those who want to try another method, there is the Emotional Freedom Technique. EFT works on the emotional body through the use of tapping on some energy meridian points while repeating an affirmation or some phrase.

The suggestion I gave earlier about tapping on the Karate Chop point or accupuncture / accupressure point while saying an affirmation was an example of this technique. This method is very effective at rapidly getting to and collapsing the core of any problem through any of the special EFT techniques available.

You can visit my EFT Basic Recipe page to see one of the versions of EFT to try out yourself, or work with a healer familiar with it.

The fourth method that has proven to be effective is Reiki. Reiki is an ancient form of energy healing that clears blockages or stuck energy throughout the body including the energy meridians while at the same time relaxing the mind and body. This technique requires willingness & your permission to heal in addition to a visit with a Reiki Master for some energy work. Reiki Masters are capable of assisting through distance healing, so an in-person visit isn't required.

In closing, I would like for you to consider the acronym for Fear.
False
Evidence
Appearing
Real

May you heal completely and Be Well!

Revised - 2014, 2017 and 2022
Did you find this article helpful? Let me know!
Testimonials | Comments
Thank you for the techniques you've presented on this page. They have almost instantly rid me of crippling anxiety again and again.
Thank you for your help and keep up the good work!
Rahul M 1/2/2018
Need help resolving your anxiety and panic?

Rev. Christopher draws upon his own experiences and study of human behavioral psychology, his intuition, connection with Divine Guidance and the work he does with clients using Energy Medicine and Energy Psychology to write articles that will empower others in their personal healing.